It’s a sultry, sensuous affair as Cole Christiansen, Austin Storm and Slate Steele get together for this bare occasion. Starting slow, they warm up their mouths, nibbling and sucking anything they can get their hands on (including each other). Whilst sucking on a lollipop, Slate gets a hankering for the real thing, so he ditches the props and pulls down Cole’s shorts, immediately engulfing his cock deep into his mouth as Austin watches, pulling down his shorts and beginning to stroke himself. Slate sees this and moves from Cole to Austin, alternating between both and then swordfighting in his mouth with both of them. Austin is almost ready to fuck, so Cole warms Slate up with a buttplug while Austin puts his condom on, but Slate wants it raw, and so Austin slips it in bare, the shimmer of his head glistening in the light as he plunges it deep into Slate’s hole. Slate reaches his arm back and pulls Austin in tighter, taking on the full length of Austin’s rod in the process. Austin pumps him from behind as Cole watches on, Slate nibbling every now and again on the tip of Cole’s cock, driving him crazy as he nearly bursts with anticipation. Finally it his his turn, so he flips Slate around onto his back and slowly inserts his hard cock in the Slate’s cock-stretched hole, fucking him missionary as Slate cums all over his chest, before Cole pulls out and he and Austin take turns blasting Slate with their sticky sweet loads. Enjoy! 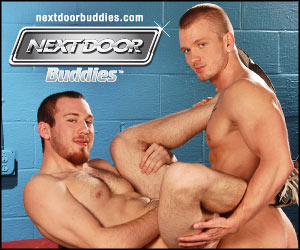