Out near the train tracks, scruffy faced Felix Barca is fixing his bike when he gets distracted by Kevin Lee—a smooth stud who flashes a smile, his muscles bursting out of his tank top. Kevin takes off his shirt, revealing his big pecs and drawing Felix closer as the two kiss. Kevin drops down as Felix’s uncut missile pops out of his jeans. Kevin teases the thick, veiny shaft and big sac with his tongue while Felix tugs his own foreskin. Kevin delivers a sensual suck as the hairy Felix smiles, the two kissing before Kevin’s rock-hard shaft is released in Felix’s face. Kevin’s balls twitch up in excitement, Felix soon devouring his dick. Felix reaches up to rub the hot bod as he sucks, soon turning Kevin around to bury his bearded chin in his hole. Felix fucks him from behind, a low shot capturing his full sac going deep in a hot rhythm as Kevin’s dick head glistens. Felix goes faster, Kevin’s cock bobbing up with each thrust. On his back, the bottom’s pecs shake as he gets more—his bod soon covered in both of their big loads. 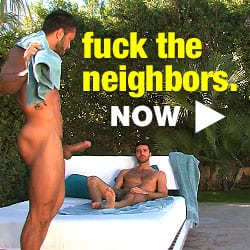