One of the sexiest men I got to meet during our quick trip to the US was this incredibly handsome straight guy from Indianna. Mark Green had spotted my ad looking for guys to model for me while I was travelling around. We spoke a little and I got to see a few selfies he had taken. I thought he looked okay. But I gotta admit, he looked much better when we met. I was a little taken back by how beautiful this guy was. 32 year old Mark told me he rode his motor bike up from Indianna to meet me in Chicago. I was really impressed that he had made the trip. And it turns out that he's also a really sweet guy. After the shoot I realised that I didn't take as many photos as I usually would because we were talking so much. The photoshoot and his video shoot went very well. Mark said he is keen to do much more. He sent me a new photo of himself this week to show me that he has bulked up even more. Next time I hit the states I'll be visiting Indianna. Do all the guys there look like Mark Green? 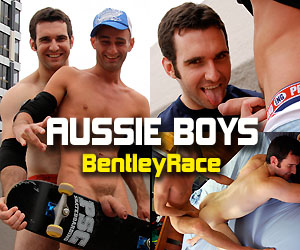