From sea to sea, the earth is plagued with brilliant natural disasters, Acts of God, economic collapse, and bumbling political drones -- all broadcast on various forms of media at all hours of the day for the hungry and panic-stricken public eye. But an Orwellian post-apocalyptic future this is not. It's the tail end of 2013, and drug-addled banker (Ricky Roman) finds himself at the center of a financial meltdown. Haunted by thoughts of suicide, a mysterious and unusual entity named Jinks (Jake Bass) appears to him with a pair of scissors, a mirror, a series of questions, and the hottest sexual encounter he's ever had. Jinks carefully inspects the banker... dissecting, inspecting, studying... we wonder-- was Jinks satisfied or dissatisfied with what he saw? Jinks then starts shearing off the banker's suit-- meticulously, but at some moments brutally. The banker is left there to stand naked with nothing but his vulnerability... and fear. Jinks forces the banker to hold a mirror, to discover and analyze himself, as Jinks begins to discover the banker-- with his mouth. What follows is an intensely sexual journey for Jinks and the Banker-- a transcendent experience for both characters . 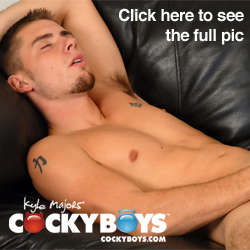