As water cascades over his toned, hairy bod in the shower, Nick Prescott’s boner builds. Staring at him from the living room is dark-haired Brayden Forrester, who strokes his big cock while relaxing in a chair. Nick dries off and puts a towel on as he approaches the voyeur, who quickly whips the towel off. Nick rubs Brayden’s hairy chest, leaning down for a kiss. Nick gets on his knees to worship Brayden’s meat, his beard planted to the hunk’s pubes. Brayden stares intently at him, holding Nick’s head as he sucks. Nick licks up and down Brayden’s hairy bod, then stands up to feed him. Nick rubs his own furry pecs and licks his lips as he gets serviced, soon bending Brayden over the chair to eat out his hole. Nick fucks him from behind, going balls deep before turning the bottom over. An aerial shot captures the hot final sequence: Nick jacks off hard Brayden as he fucks him, the bottom’s pecs bouncing from the force before the jocks squirt. 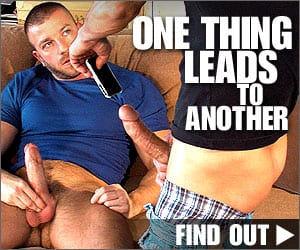