Jock studs Evan Parker and Kody Knight accept the challenge to decide who is the better top by having a little friendly competition in the park. The two star athletes seem to be evenly matched as they go head-to-head sprinting, pounding out push-ups and wrestling in the grass. But the flirty boys really show off their athletic process when they take the dick measuring contest back to the bedroom where the two natural tops flip-fuck for Kody Knight’s first bottoming scene ever! Evan gets him moaning as he slowly works Kody’s virgin hole before suggesting that it's the teen boy's turn to give him his best shot. The two studs flip again as Kody delivers an intense, scene stealing cum shot that leaves everyone feeling like a winner. 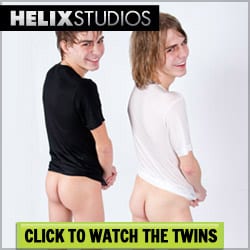