Chris Harder said right away that Kevin Carson was the most beautiful French-Canadian in all of Montreal. He couldn't stop staring at his abs, while Kevin was enamored with Chris' slightly harrier pecs. After some casual flirting, the guys were soon making out. Chris couldn't wait to use his expert cock sucking skills on Kevin, and Kevin turned it into a 69. Since the guys are both sexually versatile, they really played off each other well. Though Chris was first to pound Kevin doggy-style and then face to face, you could tell by his facial expressions that he was just waiting for Kevin to rail him. And then things really heated up! You could say they really found their stride after flip-fucking, because they both shot huge loads all over Chris' torso! 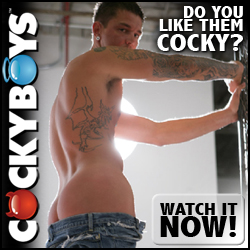