Coach Andrew has a secret that's not so secret anymore once the Principal Matt comes into the Coach's office for a small chat about what's been going on behind closed doors. Matt casually confronts Andrew about how he walked in on him and Joseph fucking in the class room but then quietly left the room. The coach at first denies any wrong doing but then says it was the students fault but ends with the confirmation of yes he fucked him but there is no way the Principal can fire the best Coach the school has seen in years. Matt tells Andrew that if he wants to keep his job he will have to fuck him and let him suck on that big cock the students have been raving about. The Coach gives into the demands and pulls out his enormous dick and the Principal loves what he sees and begins to use his mouth watering lips to please the dick. Matt wants to get his hole ready and no better way to prep for a big dick than to use a miniature baseball bat. Coach grabs the bat and eases it deep inside Matt who is delighted to feel the girth and his ass stretching as Coach pumps his ass back and forth with the bat. Rubbing his hole Matt knows it's ready for the real thing so Coach lubes up his hard dick and slides right in giving Matt what the students received as well which was a good hard pounding. After they blow there hot loads the Principal informs Coach that he needs to still meet up with him once a week for fuck sessions if he wants his job for the rest of the year. 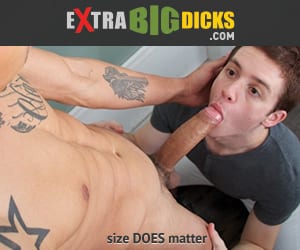