After Tommy's telling story of his sexy bathroom encounter Mario tells him a little story about when he was at the gym and the guy he was fucking sounds similar to the same guy. Mario starts out with how he was changing in the gym locker room when this sexy guy walks in and just stares at his huge thick cock. Eyes locked onto his dick Mario keeps asking the man, which turns out to be Braxton, what it is that he is stating at. Mario comes right out and tells him if that he's looking at his lovely dick he might as well get on his knees and pay lip service to his beautiful uncut cock. Without saying a word Braxton is on his knees gulping and stroking that massive thickness. He is in cock heaven playing with this big meat and wants it deep in his ass. Mario stretches that tight hole slowly and gets the thickness all the way inside. Braxton gasping with pleasure and the feeling of such a thick dick throbbing deep in his ass tells Mario to fuck him hard and don't stop. Mario can't believe he is taking his dick so well so he pounds his ass pulling all the way out then back in pushing harder and harder until they both explode all over the gym. 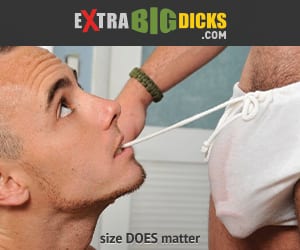