By the time Roman Todd catches up to bestie Johnny Riley, Johnny is visibly distraught. Seems Johnny caught a glimpse of best friend Roman fucking someone else and it triggered a sudden and unexpected jealousy. To Roman, it was just a fuck, but seeing how much it hurt Johnny has him reconsidering the ramifications of his actions, and he tells Johnny that he had no idea he was interested in more than a friendship. Johnny tells Roman that he doesn't just want a hook up and Roman tells him they can be more than just fuck buddies. Johnny's eyes light up and they make their way back to his place to consummate the agreement, as Roman peels off Johnny's clothes and pushes him up against the wall, going down on him and eating his ass. Johnny moans with pleasure until Roman throws him onto the bed. Johnny grabs Roman by the cock and pulls him closer, taking Roman's dick in his mouth and sucking him off until he's nice and hard. Once he is, Roman lays him out and proceeds to pound Johnny all over the bed, first on his back, then from behind. As he plows Johnny with 8' of raw cock, Johnny takes it all with a smile, stroking himself off and losing his nut as Roman fucks him sideways from behind. He pulls out and blasts Johnny with his load as the two of them laugh at the turn of events that have led them both here. Enjoy! 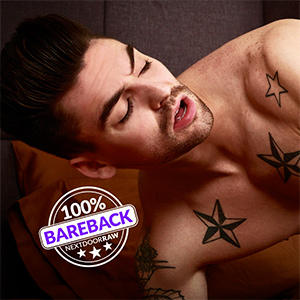