In town for the festival weekend, Eskimo buddies Elye Black & Scott Finn are ready to hit the town and tag team the night away, but it doesn't all jump off for a couple more hours, and Scott's already out of control. His hard dick is bursting out of his pants, and Elye's looking pretty good on the other side of the bed. Elye thinks Scott's just too excited, but Scott persists, so Elye says fuck it and gives Scott the attention he's looking for. Pulling out his thick cock, he feeds it to Scott before bending him over and giving him the first class ticket to the back door action. Scott takes Elye's dick like a champ, and Elye knows it isn't the first time for Scott, but he's surprised when Scott flips the script and tells him to mount his cock. Usually Scott just wants to get the cum fucked out of him, but today he's feeling festive, and so Elye gets on top and rides Scott's hard dick. Scott fucks him all over the bed, flipping him over as Elye strokes his load clean. Scott pulls out and erupts, spraying Elye with the first of the many loads he intends to bust this weekend. 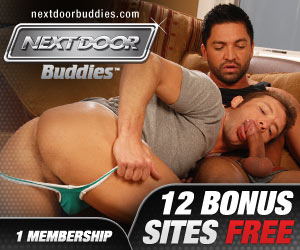