Sexy bearded French ginger Olivier Robert makes his porn debut and Gabriel Clark gets the honor of breaking in the ripped hairy-chested stud! Chatting online, meeting & bonding over yoga leads to passionate kissing in bed and as Gabriel sucks on Olivier's sensitive nipples, he's already on the path to getting "Clark'd". Soon Olivier is just as eager to return the favor, sit astride Gabriel and make out with his bod. It doesn't take long before an excited Olivier pulls off Gabriel's shorts to suck him and after getting obvious pleasure, Gabriel gets Olivier to feed him his cock and balls. BUT, Gabriel soon wants his ass and Olivier immediately gets on all fours to get his ass eaten. Olivier is pulled to the edge of the bed and gets fucked deep, Gabriel style. Targeted thrusts are followed by Gabriel practically on top of him drilling him even deeper. Gabriel switches things up by taking Olivier to the window to make out, suck him again and fuck him from behind for the whole world to see. Finally Gabriel takes Olivier back to bed to pound him on his back and give the sexy ginger wide-eyed pleasure. Gabriel can't hold back and when he pulls out he showers Olivier with a torrent of jizz. With Gabriel's help Olivier gets off too, stroking out a load while on his back. Both Olivier and Gabriel lie back in a state of obvious sexual euphoria and total satisfaction and before they fall back into making out again Olivier has one word for his first time: Perfect. 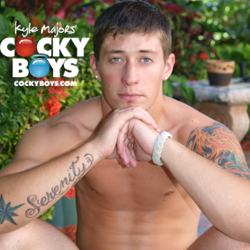