Meet Lucky Jones (Tayte Hanson), who is ironically unlucky when it comes to finding love and equally as unfortunate in his hook-up history. So, he tries out a matchmaking service and films a fairly standard video profile. BUT, during the course of the filming, he lets down his guard and reveals the intimate details from one unexpected hookup. Having texted to many guys, Lucky/Tayte had his wires crossed and made plans with a smaller guy who he planned to manhandle. However, it's muscle beefcake Austin Wolf who answers the door and establishes from the start that HE is in charge. Austin holds up Lucky/Tayte by the neck, makes out with him, begins to undress and silently dominates him. At first Lucky/Tayte is befuddled but becomes gets more excited as Austin puts him to his knees to feed him cock and fuck his throat. And in the midst of this Austin reaches over to finger Tayte's hole and bring him wide-eyed pleasure. Soon after new sub Lucky/Tayte begins calling him "Sir", Austin turns him around and pins him up against the wall to fuck him slow and deep. Austin follows this by turning Lucky/Tayte against another wall to rim and finger his hole and drill him from behind while virtually ignoring his various attempts to engage him in conversation. Even when Austin drags him to his living room to plow him from behind in front of a mirror, he is a relentless fuck machine disinterested in Lucky/Tayte's efforts talk to chit-chat with him. At one point Lucky/Tayte anticipates what "Sir" Austin wants and gets on his back to be fucked. Austin remains the strong silent type who just keeps humping & pumping into Lucky/Tayte knowing just what to do. Austin fucks a load out of him, then bears down pounding him while Lucky/Tayte dutifully works the nipples on his thick pecs. When he is ready Austin pulls out and cums over Lucky/Tayte's hole and finishes his intense orgasm inside him, spawning a loud primal scream and total satisfaction. Later while Lucky lies in the arms of Austin, he confesses the mix-up leading to one last twist and the revelation that love does win out in the end...just not for Lucky & Austin! 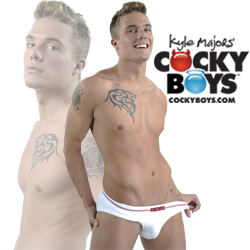